Let’s be real – no one really enjoys shaving… it’s just one of those things that we do to keep comfortable or stay within our social norms. Funnily enough I was having that discussion with my male co-workers a couple days ago. It seems like no matter the gender we all find shaving to be an annoying task. And razors are freaking expensive, so does it have to be an expensive and annoying task? 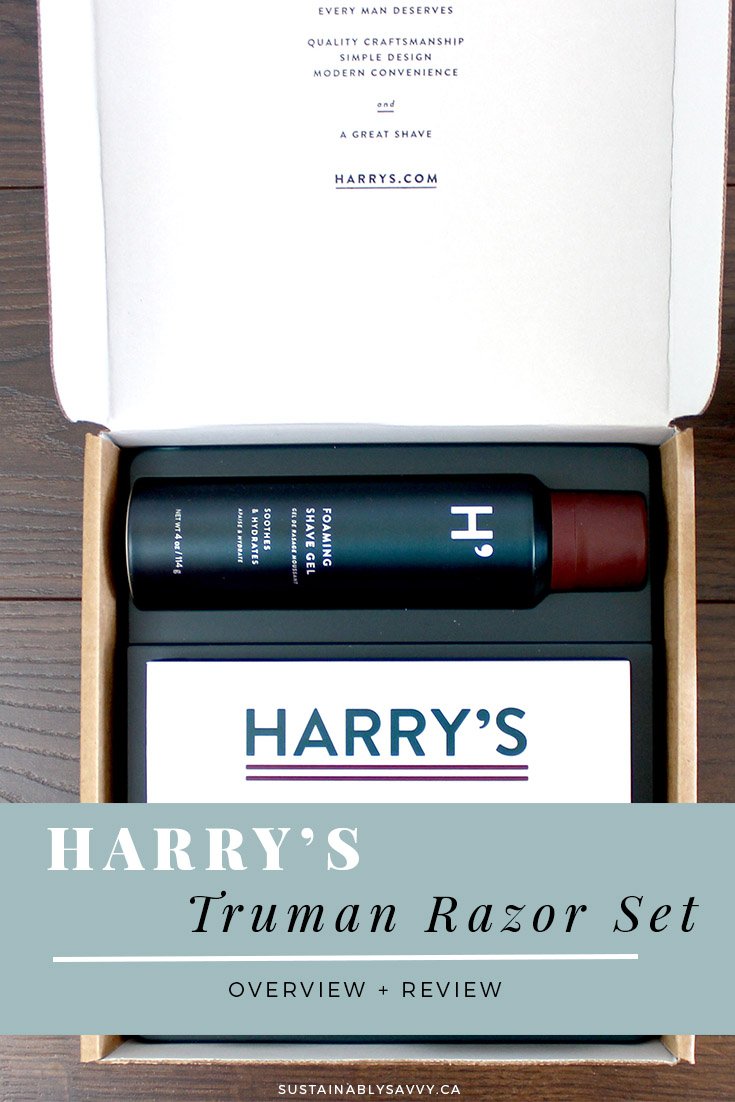 A couple months ago I was contacted by Harry’s asking if my boyfriend would like to try one of the shaving sets. Lucky for him, he doesn’t have to shave for work and therefore doesn’t bother with a razor. But they also asked if I would like to try one for myself – and because Harry’s is a rather cost effective product with some focus on sustainability I agreed. Have you seen the ridiculous price of women’s razors?

Harry’s was created by two men who realized the cost of shaving was absolutely absurd – the average price of a razor blade head costs about $4.00. Harry’s razors are manufactured in Germany within their own factory to ensure a genuine and well-made product that cuts down on unnecessary waste and costs. They offer a free trial to see if you like the product and you can purchase shave plans to have product automatically shipped to you so you never run out.

Within the Harry’s Truman Set you receive the razor handle in your choice of orange, olive or blue along with three razor cartridges, travel case and foaming shave gel or cream. So really, you’re getting six items for the cost of $2.50 each. You can purchase additional blades for the cost of $2.00 or $1.75 each depending on which pack (16, 8 or 4) you choose.

How are they more sustainable?

When I received the Harry’s Truman Razor set there was no unnecessary or superfluous packaging and everything within the package was 100% recyclable! Although shaving is a pretty unsustainable practice in general (due to the constant need to repurchase razor blades) purchasing a reusable handle and heads is a better option than disposables. It also ends up costing you less in the long run!

Before using the Harry’s Truman Razor set I was using the Schick Hydro for Women. The initial purchase of the reusable handle cost me about $12.64 and came with one extra blade, an additional purchase for a four pack of blades cost about $17.97. That works out to $4.50 per blade. Absolutely ridiculous! Whereas if I repurchase a 16 pack of blades for the Harry’s Truman set it will land me at $1.75 per blade. If you’re a regular shaver, you’d be dumb to spend the extra money.

So far I’ve only been praising the Truman Razor set, I know! Anything that can save me money usually puts a great big smile on my face… but there are a few things that I do dislike about the Harry’s razor set. When I was speaking with the agent from Harry’s she mentioned that they are trying to expand their demographic toward women and if that’s true I do find that they need to offer a more unisex product with unisex branding. I know it’s a small thing, but opening up the box and seeing “every man deserves” would be more appealing to me as a woman if it said “everyone deserves.” Y’know?

Also, I highly dislike the foaming shave gel. It’s definitely not all-natural by any means and smells like male shaving cream with a heavily perfumed scent. I would like if they offered an un-scented option at least! Seeing as my boyfriend doesn’t shave I’m not sure what I am going to do with the shaving cream…

The razor will give you razor burn if you don’t use it with some sort of cream – as I’m used to using the Shick Hydro which has some shaving gel built into the blade I didn’t realize that razor burn was really a thing… until I didn’t use anything with the Harry’s Truman Razor Set. Right now I’m using what’s left over of the New Wash Bottle (which I did a review on!) but I’m sure you can use regular body wash or conditioner as a substitute.

Last but not least it’s very difficult to shave your nether regions (yes I went there.) Maybe it’s not really that difficult but I find that the blade shaves so closely to the skin I’m afraid of cutting skin around that region. With a little practice it does get easier, but at first it was pretty intimidating to put it near that area! 😳

Overall I was pretty impressed with the Truman Razor Set from Harry’s. It definitely does what it says and you can’t really beat the price – considering I was paying almost $5.00 per blade before! I can definitely see myself continuing to use this and the travel case makes it perfect for traveling as well (I no longer feel the need to buy disposable razors when I go on vacation!)

If you’re tired of paying ridiculous prices for razors and you don’t mind that the branding is based more toward the male demographic then this product just might be a great way to save some money ☺️!

*This post contains products sent to me for review, all thoughts and opinions are 100% my own!